The Yellow Caravan had been one of a pair or wagons used in a travelling bioscope show that visited villages and fairgrounds at the turn of the century. When stationary, the two wagons would have faced one other end on. Linked by a fascia board this would have formed an entrance to the cinema tent behind. The two sides of the caravan were different. The outer side had an elaborately framed panel, awning and no windows, the inner would have been plainer with windows. Whilst travelling, the awning was pulled down over the panel creating a painted canvas picture advertising the show. 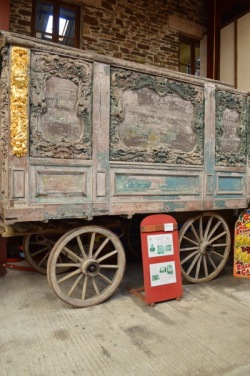 Dr Lawrence's Cinematograph wagonIt was in King's Lynn, where the Trenowath brothers had their business, that moving pictures first appeared on a fairground. On 15th February 1897 Randall Williams, 'the King of Showmen' adapted his Ghost show to present moving pictures to the public. From 1897 showmen played a significant part in bringing, what were called, 'living pictures' to the public. They played to provincial audiences where the opportunity to see this new form of entertainment and technology was limited and by 1898 these early cinematograph shows dominated the fairground landscape. The better known booths were Biddall's Royal Bioscope, Ball's Living Pictures, William Taylor Coliseum, Green's Cinematograph and Arnold Bros Picturedrome. These shows were much larger than our show and needed traction engines (many made by Burrell, the Thetford manufacturer) to pull them. Our bioscope show was a smaller horse drawn affair which would have visited village fairs around Norfolk and beyond.

What is believed to be the only remaining example of such a wagon can be found at Dingle's Fairground Museum in Devon. It was owned by Edwin Lawrence who began touring the country with Dr. Lawrence's Cinematograph in 1897. He continued touring until 1910, when permanent cinema buildings took over from bioscopes. Much of Lawrence's road train was destroyed in an accident, but the elaborate right hand wagon survived eventually ending up in a field being used to house farm labourers. It was rescued by the Lincolnshire Vintage Vehicle Trust.

Walter Trenowath, in the period when they were falling out of favour with showmen, purchased two of these wagons one yellow, the other green (although we cannot be certain this was their original colour, nor can we be certain how much embellishment was removed in their conversion). What we do know is that they became 'caravans' in order to hire them out to those that wanted to use them for camping holidays.

Examining the Lawrence wagon and the 'Yellow Caravan' there are clear similarities, for example, the construction of the longer sides, the shape of the windows and the decoration around the door and the 'ticket window', although it does not seem as elaborate. One might even speculate whether Trenowath build such wagons for the fairground showmen or indeed embellished them following basic construction. He had originally been an apprentice cabinet maker and upholsterer working for his father. In the 1891 census, aged 28, his occupation being given as 'cabinet maker and upholsterer' and later describing the business as, 'undertakers, cabinet makers, furniture removers and upholsterers'. He also operated, 'a pantechnicon van depository, with eight large vans, in Gaywood Road', Kings Lynn. 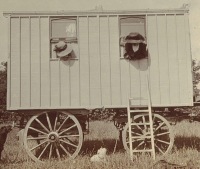 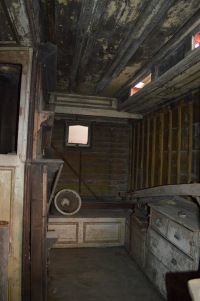 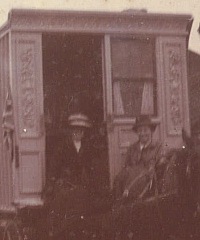 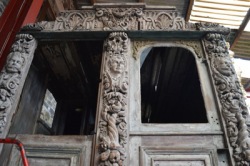