Aspect 4: Why did they get confused with Suffragettes? 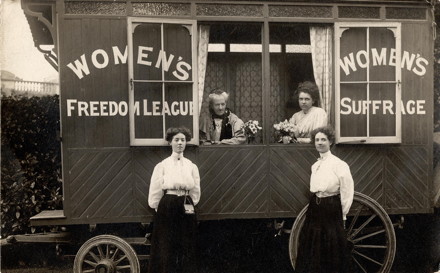 The WFL CaravanIt was not that surprising that three young ladies should chose to undertake a horse-drawn caravan holiday in the summer of 1912. Such holidays had become a craze among the leisured and professional classes of Edwardian Britain and it was young women who were the vanguard of the suffrage movement. In 1908, a breakaway organisation from the militant Women’s Social and Political Union (WSPU), called the Women’s Freedom League (WFL), were seeking new ways to gain support in the more rural towns and villages. Their campaign tactic was to combine propaganda outreach with the new craze and take to the road using a caravan. In April 1908, they formed a ‘caravan committee’ and began looking for someone to donate a horse which would be named after Herbert Asquith, the Prime Minister. As their newspaper Women’s Franchise explained, "in recognition of the fact that it will be driven by women to assist the cause of Votes for Women". By the next week the first tour had been planned for the third week of May starting at Oxshott and touring through Surrey and Sussex to the south-coast towns, and by mid-April, the WFL were recruiting women in pairs, "who are able to spend not less than a fortnight in this interesting and health-giving form of propaganda". The van was to spend five months on the road and by the following year its use as a campaign tool was so well established that the Ipswich branch dedicated itself to securing a second "Freedom League Caravan".

Typical activity on arrival in a town or village was to chalk the pavements with slogans and then engage with the local population through mass meetings and handing out leaflets. At Andover, Marguerite Sidley reported, "like so many of the places visited by the Caravan–had never seen a Suffragette until we arrived, and great was the interest shown in our pavement advertisements. We had an enormous meeting in the evening, and were told on all sides that so many people had never before gathered in the Market Place for a meeting. … We feel that the Caravan is really doing splendid educational work, bringing home to the men and women in the country places something of their responsibility in the State, and teaching them to understand a few of the laws under which they live."

However those that volunteered for service did met resistance in some areas prompting "A.E.W" to write into the Women’s Franchise with the suggestion: "To prevent the possibility of annoyance from tramps or other ruffianly men, it seems to me that a trusty bull-terrier should be part of the equipment of every caravan. And a 'water-pistol'–sold at Gamage’s–and a knowledge of jutsu would give a feeling of security in lonely country districts that have to be traversed." 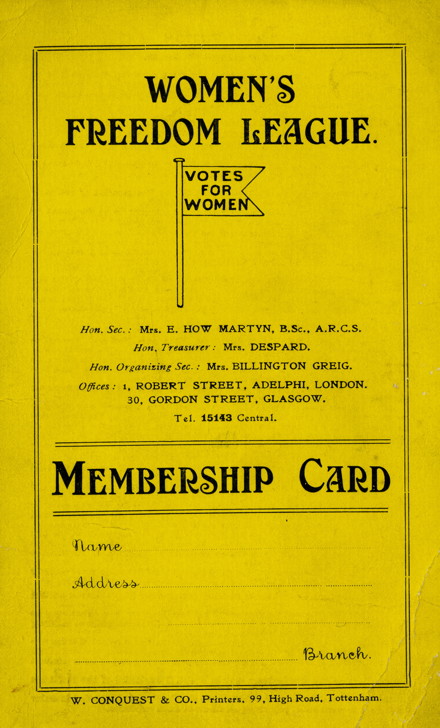 WFL Membership Card–bright yellow like the Yellow CaravanThe second caravan was to be deployed on a tour of East Anglia that summer starting in Ipswich and finishing in Norwich with a route taking in Debenham, Eye, Diss, Buckenham as well as Aldeburgh, Felixstowe and Great Yarmouth.

Soon the other women’s suffrage organisations also took to ‘Caravan Tours’ which became a feature of the summer months is rural areas throughout the country up until the outbreak of the First World War. It perhaps is no surprise therefore that Honor, Win and Judse might have been greeted with scepticism as to their motives given that the North-west Norfolk by-election was taking place that very month. 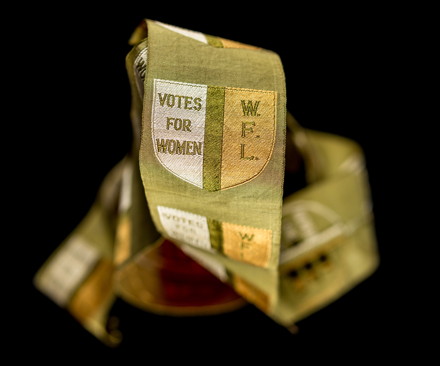 Above:WFL ribbon showing the colours of the organisation, white, green and yellow
Below: souvenir postcard showing the WFL caravan 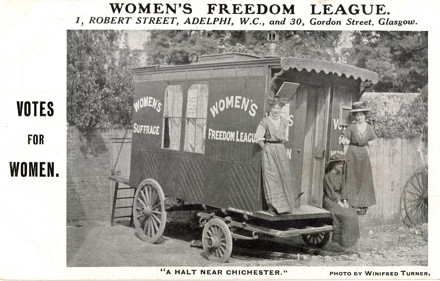