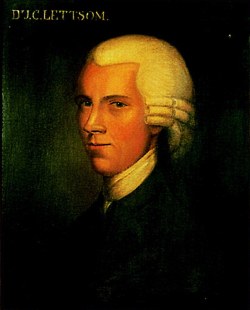 LETTER XXIII. On Prisons
THE history of punishments inflicted by one class of human beings on another, forms a dreadful catalogue of cruelty as well as depravity. They are prominent in every Government, and happy it is that whole penal laws tend to reform the offender by salutary impressions on the mind, rather than by corporal inflictions; as rational conviction is more permanent than compulsion from dead pain; one begets virtuous reflection, the other obduracy and ferocious passions.
If these sentiments be applicable to hardened offenders, they are certainly more so to the period of youth, when the mind is open to conviction, and more capable of acquiring reformation, as may be deduced by contrasting the effects produced in the management of the work-house of Lynn, and of Aylsham, with that of the opulent City of Norwich, in which a species of punishment has been practiced that has long been the opprobrium of the Slave-holder; and the reader will see with painful emotion, in the annexed plate, an accurate representation of those instruments of torture which have been applied on juvenile years in the workhouse, and where fatality is more destructive to youth than was formerly even the revenge of Crete.
...
For, certainly, in this workhouse, health and life cannot be highly estimated, when a mortality shocking to every humane feeling is allowed to prevail, in consequence of filth and neglect, as well as of the Small Pox ... 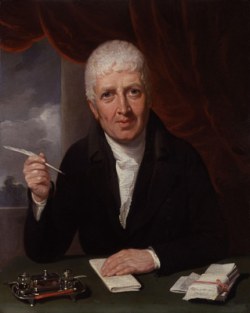 I come now to the most melancholy and painful task my pen was ever employed in, where I least expected it, and will scarcely be credited. The poor of this city (Norwich) are, by virtue of an Act of Parliament, under the management of sixty guardians, one of whom is appointed Governor for the year. As I had frequently met with much petulance and obstruction in my visits to these places, I waited on the worthy Chief Magistrate, Mr. Rigby, Mayor of the city, and he very readily and politely accompanied me.
It is called the Duke's Palace workhouse, having formally been the ducal residence of the Norfolk family. The building is old. The average number in the house about five hundred and fifty. In the first room I visited there were forty two beds, ten of them cribs for single persons, and the others had two in each, there being seventy four persons in the room. At the entrance, and in the room, is a most offensive and indecent privy, something like a watchman's box, and so much out of repair, and so situated, that the sexes cannot be separated when decency most requires it. The paupers ate, drank, and slept on the beds, having no other room to live in; the floors, from their filthy state, could not have been swept for a long time; the windows and casements small; the latter all broke; the windows dirty, and almost covered with cobwebs; the air throughout extremely fÅ“tid and impure. There was a leaden sink in the room, down which was thrown every species of filth. Near this room was a stone sink and a water-pipe, the cock of which would not turn, nor had it the appearance (from the dry rubbish in it) of having been used for a long time. Every other room was equally filthy as the one described, from the same cause, offensive privies; and they were alike crowded. The beds contained two, and very frequently three persons each, but in one there was a family of seven!!
In the boys room were offensive tubs as urinals ; these are daily emptied in to a sink in the room, and it did not appear to have been lately washed. One bed in the room was particularly offensive; from an infirmity of the boy who slept in it, his urine passed completely through the bedding, and was suffered to accumulate on the floor to a very putrid degree. The appearance of the poor was singularly squalid, dirty, and miserable, and their clothing ragged and wretched. There is no room set apart for, the sick, as an infirmary; and from the records in the book, and the surgeon's certificate it appears, that in July last the Small Pox raged much in the house; twenty-nine persons, all children, were ill of it at one time, and, shocking to Humanity, were intermixed with the paupers in seven rooms. Twenty-nine other children who had not had the Small Pox were in these rooms, and had been so long exposed to the infection that they could not be secured from it either by removal or inoculation; most of these eventually had the disease, and eight deaths were the consequence of it. All this occurred in July. 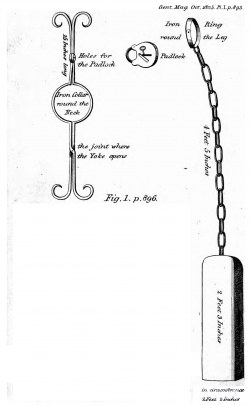 During the time of inspecting the rooms, all the paupers, except the very aged and infirm, were congregated in the court-yard, among whom, one boy particularly attracted my attention. He had round his neck an iron-collar called a yoke, with four projecting prongs, secured by a large clumsy iron padlock; upon examining his neck, it was slightly galled; upon one leg was a strong iron ring fastened near the ancle [sic] like a hand-cuff, to which was attached a massy chain about four feet five inches long, at the end of this chain was a log of wood two feet seven inches long, and two feet ten inches in circumference, weighing altogether twenty-two pounds. With this incumbrance he slept every night; but during the hours of work in the day the chain and log were taken off, that he might have the use of his legs to spin; but the yoke round his neck had never been taken off during three weeks in which he had been in this state of punishment: as soon as he had finished his work, the chain and log were regularly fastened on his leg, and in that state he passed the night. Every Sunday he was locked up by himself all the day with his irons on. He told me, in presence of the mistress of the house, that this punishment was to continue for six months, and this was not contradicted by her; he complained that the ring had made his leg sore, and, on taking his stocking off there appeared some scabs and slight excoriations upon it. He was twelve years of age; his name William Rayner; his father dead, and his mother run away. Under these circumstances I requested the worshipful the Mayor would have the goodness to order his irons to be taken off, and that he would oblige me with permission to take them to his house, that the drawing I now inclose (Plate I.) might be taken of them, and I can with truth say, that for these very many years I have not seen the most atrocious felon ironed in so severe a manner. It was told me that this boy had been frequently sent to the City-bridewell for petty thefts, and that he was incorrigible. This however, did not turn out to be the truth; for, the next morning, I went to the Bridewell, and, together with the keeper, examined the books for ten years past, when it appeared that this boy was sent to Bridewell for two days, the 18th April, 1804, for running away from the work-house, not for theft; and the keeper told me he never was in custody there before, or since; that he is not incorrigible, I am inclined to believe, for he had both sense and gratitude to come running after the Mayor and myself, and thank us feelingly for his deliverance.
The following account of the deaths in this work-house for two years and nine months last past, proves two things; first, that the wretched state in which I found it was neither an accidental nor a temporary circumstance; secondly, that nothing is more destructive to human life than shutting up so many persons in close rooms surrounded by every species of filth, and where they constantly breathe the foulest air.