Race, Prejudice and the Circus in Victorian Britain

Thomas Horne, the Chaplain of the Showman's Guild, recalling Pablo Fanque in 1905, ascertains that:

"In the great brotherhood of the equestrian world there is no colour-line ... The camaraderie of the Ring has but one test, ability."

But was this true? The circus in the 19th century had many foreign performers, indeed British artistes more than often took on foreign sounding names to add to their mystic in the ring. There are few prejudicial references to black and ethnic performers in newspapers from the time, but this does not mean there was no prejudice. Indeed, when one looks at evidence, circus performers were not well regarded, and black performers suffered more that most – not necessarily because they were black, but because they were 'foreigners'.

Horne's assertion can be tested by a court case held in December 1859. William Wallett, famous clown and Pablo's friend, ran his own circus for a period. He was taken to court by Assam Ben Mahommed, a tumbler, for non-payment of his wages. This newspaper report enables us to examine attitudes prevalent in Victorian society. 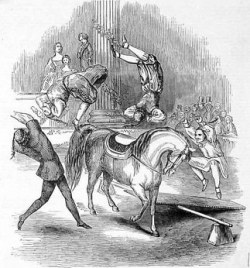