Jem Mace, Champion of the World 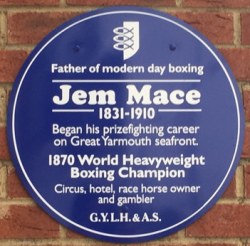 The Victorian circus developed rapidly into an entertainment industry eager and keen to exploit the interests of people from all classes. The growth of popular culture was inextricably linked to industrialisation and the expansion of the economy. While we generally regard the working population of 19th century Britain as poor and exploited by today's standards, they were better off than generations before them. The emergence of a nascent consumer society began not only with goods but also services. Entertainment was an easy win for entrepreneurs, but also for those from humble beginnings, with a specialised talent and confidence to move beyond the skill they had developed. It gave them a unique opportunity to manage and make money out of the knowledge, experience and expertise they had gained. This was the economic story of the heyday of the Victorian circus. Huge financial risks were taken by those with very little financial acumen. Many had a circus performance background but some did not. One of these was Jem Mace, from Beeston, Norfolk, an itinerant busker, who became the first Heavyweight Champion of the World.

Mace had taken up bare-knuckle prize fighting after an incident outside a sea-front public house in Great Yarmouth, in which his fiddle was smashed in a brawl with three fishermen. Having knocked out two of them, the other fled, and "a gentleman", on giving Mace a guinea, suggested he become a prize-fighter. The sport, although illegal, could bring huge financial rewards. Mace entered the employ of Bunny Blythe, a showman with a small circus, and toured the Lincolnshire Fens playing his fiddle and ensuring protection for the troupe. He then, around 1851, set up his own boxing booth to take on all comers at fairs. Eventually he found his way to Nat Langham's London club where he drew attention to himself by defeating Lord Drumlanrig with the gloves in 1856. In 1858 he became Middleweight Champion of England by beating Bob Brettle for the first time, and in 1861, Heavyweight Champion of England through his win over Sam Hurst.

His victory over Hurst in June 1861, provided the perfect publicity for exhibition bouts in Fanque's circus from August to October of that year. His prize money and proceeds from betting enabled him to establish his own circus troupe in 1862:

NOTICE TO THE PUBLIC: – JEM MACE’S GREAT NATIONAL CIRCUS! THE BEST AND MOST UNIQUE COMPANY IN THE WORLD.— IN consequence of a great number of small circuses and mountebanks travelling through the country, advertising spurious endeavouring to steal Jem Mace’s (the Champion of the World) honours, and injuring the reputation of his gigantic circus by placarding different towns in the provinces with other men’s names as champions of England and the world, the public will bear in mind there is but one Champion, and that Jem Mace, the conqueror of all nations, and the envy of all would-be champions. Mace is the only man entitled to the cognomen or title of Champion of England and the World for has repeatedly challenged Sayers and Heenan. and they both decline to contest their merits with him. In order to satisfy a number of persons who wish to know the Champion’s fighting weight, it is 10st 2lb. He (Mace) is the smallest man that ever was Champion of England. During his Championship, he has beaten two of the largest men that ever put in a claim for the Champion's Belt, one them weighing 17&#189;st.
[The troupe consists of] Miss Rose Myers, Miss Eliza Stoodley, Miss Amy Walters, Miss Rebecca Holmes, Miss Agatha Wilson, Mr Richard Dockerell, Mr Edward Carrot, Mr Charles Abbott, Mr Thomas Leaver, Mr Harry Montague, Mr Butcher, Mr Washington Myers, Mr Alexander Rockwell, Mr Charles Fletcher, Mr John Nobles, and Mr Jem Myers.
He is going to stay in his native land to improve the equestrian profession bringing together all star performers from all parts of the globe, as he is determined not to have any other kind in his establishment. Jem Mace will set-to at each performance with the celebrated Wolf, Champion of Africa, and will also exhibit his tankards, goblets, gold medallions, and the Middle Weight Champion Belt. Mace's trophies are not like the tin-plated affairs shown in other circuses, and borrowed for particular occasions to make show with in Oxford, Liverpool, and other towns. Mace’s are all genuine; the names the presenters, with dates and addresses, are engraved on them. They can be personally inspected. Jem Mace is the only Champion that ever had the honour of appearing before Her Majesty the Queen, the Prince of Wales, and royal family. That event, as is well known, look place at Ascot. Last, but not least, the old original Champion of England’s Belt will be exhibited in Mace’s circus — a trophy not seen elsewhere. The value Mace trophies exhibited daily is worth a net sum £1,500, which shows the public what light and estimation the little Norfolk hero is held by his fellow countrymen. Mace’s performance gives satisfaction to all beholders, he is acknowledged by the press and the sporting public to be the master of his profession; and is determined to protect, maintain, and hold the pride of all Englishmen's hearts, the idol of the world - "the old original Champion's Belt" — against all comers. Route:— Saturday, Sept 20tb. Halstead Monday. Colchester: Tuesday, Wednesday. Hadleigh: Thursday. Ipswich: Friday. Saturday. Framlingham. Satisfaction warranted, money returned.
Bell's Life in London and Sporting Chronicle – 21 September 1862 p.7.

Despite his foray into circus ownership, Mace sold his concern a year later, underestimating how difficult the business was, and making the mistake that his fame alone was enough to sustain audiences.

He returned to the ring, and in May 1870 defeated Joe Allen in Kennerville, Los Angeles. This fight was to become recognised as the first to decide the Heavyweight Championship of the World.

By 1910, an old man, he had fought and exhibited throughout the world, and in the process, making and losing a fortune. November 1910 was his effective swansong in Sullivan's Circus at St. James Hall in Newcastle. He played to a packed audience much to the anger of local politicians, who complained the entertainment had drawn people away from hustings during the general election. The reporter from the World Fair noted:

They did not want to be bothered with political speeches, all they wanted to see and hear was the unconquered champion of the world. Their sole ambition was to gaze on the veteran of the pugilistic ring, so that every day and every performance throughout the week the standing order in this famous establishment was either standing room only or house full. This reporter noted the ringing choruses that used to greet the visibly moved Mace as he took the stage.
Good old Jimmy, Brave old James
Take a list and run down all the pugilistic names
Search in Fistiana and see if you can trace
A man with such a record as old Jem Mace.
cited in Gordon G., Master of the Ring p.483.

Jem was to die at the end of the month, penniless, his only possessions were his fiddle and a cherished bust of Tom Sayer, his great rival, which he had refused to sell.