Charles Dickens and The Circus 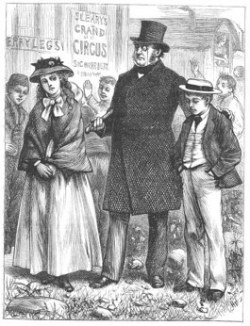 Those familiar with Victorian literature will no doubt immediately reference Charles Dickens' work when looking for examples of the portrayal of the circus in writings of the period. Dickens in Sketches from Boz: Illustrative of Everyday Life and Everyday People (Vol I) provides descriptions of a visit to Astley's, published in the 1830s. In this chapter he evokes a nostalgia for his youth that was conjured up by a visit to the circus:

"there is no place which recals [sic] so strongly our recollections of childhood as Astley's. It was not a "Royal Amphitheatre" in those days, nor had Ducrow arisen to shed the light of classic taste and portable gas over the sawdust of the circus; but the whole character of the place was the same — the pieces were the same — the clown's jokes were the same — the ridingmasters were equally grand — the comic performers equally witty — the tragedians equally hoarse — and the "highly-trained chargers" equally spirited. Astley's has altered for the better — we have changed for the worse. Our histrionic taste is gone; and with shame we confess, that we are far more delighted and amused with the audience, than with the pageantry we once so highly appreciated."

Dickens further developed his description of Astley's in the Old Curiosity Shop:

"Dear, dear, what a place it looked, that Astley's; with all the paint, gilding, and looking-glass; the vague smell of horses suggestive of coming wonders; the curtain that hid such gorgeous mysteries; the clean white sawdust down in the circus; the company coming in and taking their places; the fiddlers looking carelessly up at them while they tuned their instruments, as if they didn't want the play to begin, and knew it all beforehand! What a glow was that, which burst upon them all, when that long, clear, brilliant row of lights came slowly up; and what the feverish excitement when the little bell rang and the music began in good earnest, with strong parts for the drums, and sweet effects for the triangles! Well might Barbara's mother say to Kit's mother that the gallery was the place to see from, and wonder it wasn't much dearer than the boxes; well might Barbara feel doubtful whether to laugh or cry, in her flutter of delight.
Then the play itself! the horses which little Jacob believed from the first to be alive, and the ladies and gentlemen of whose reality he could be by no means persuaded, having never seen or heard anything at all like them – the firing, which made Barbara wink – the forlorn lady, who made her cry – the tyrant, who made her tremble – the man who sang the song with the lady's-maid and danced the chorus, who made her laugh – the pony who reared up on his hind-legs when he saw the murderer, and wouldn't hear of walking on all fours again until he was taken into custody – the clown who ventured on such familiarities with the military man in boots – the lady who jumped over the nine-and-twenty ribbons and came down safe upon the horse's back – everything was delightful, splendid, and surprising! Little Jacob applauded till his hands were sore; Kit cried "an-kor" at the end of everything, the three-act piece included; and Barbara's mother beat her umbrella on the floor, in her ecstasies, until it was nearly worn down to the gingham."

But it was in Hard Times that Dickens was to provide the most sentimental depiction of the circus. A metaphor for the importance of ‘fancy’, or imagination in life, in contrast to blind and uncaring utilitarianism that reduced individuals to numbers, and society to ‘facts’ characterised by Gradgrind's school.

Given the later Victorian concerns about women and child exploitation in the circus, Dickens' portrayal of the circus is perhaps surprising in its geniality. It may show how influential this form of entertainment was on society as a whole. His writings on the circus reinforced the nostalgic sentiments for the simplicity of a non-industrial world that are found in his other work.