Madame Caroline and her fall at Bolton

In Chapter 6 of the book the author explores the uproar following the death of Selina Powell, a female rope walker, who was killed in a fall at Aston Park, Birmingham in 1863. Her death shocked the nation, particularly as it was discovered that she was pregnant at the time. It drew an unprecedented comment from the Queen herself, and led to the questions in Parliament that concluded that it was difficult to legislate against such exhibitions. As Punch put it on 1 August 1863:

"If the very highest idea of a Government is, as Sydney Smith says, a Stout Constable, even that officer should prevent demoralising exhibitions. Sir George Grey himself could interfere when M. Blondin proposed to carry a child — not unborn — along the Sydenham rope. Parliament would give him a prohibition Bill in three days, if he is afraid to act without one."

While some corporations and town boroughs initially banned female, or male, wire and rope walkers from performing their acts, public outrage soon died down. In May 1869, another outdoor fall was to occur when Pablo Fanque's circus was at Bolton. Madame Caroline, another Female Blondin, fell to the shock of the crowd that had assembled at the Old Coronation Mills. Luckily she was caught by the crowd. The incident highlighted the fact that local government had been left to police such exhibitions, and led to vitriolic civic rivalry stirred up by the local press. 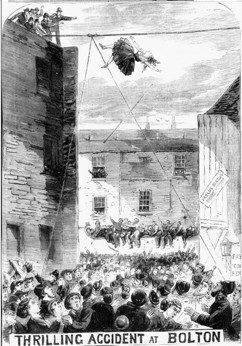 PABLO'S CIRCUS. ACCIDENT TO THE FEMALE BLONDIN, — An incident last night in connection with the performances at this popular establishment, which, at one time, threatened to terminate in most disastrous result, but which, fortunately, owing to the presence of mind of the spectators, was averted. Madame Caroline, who assumes the title "The Female Blondin," had been announced to give an out-door performance. She was to walk along a rope stretched from the third storey of the Old Coronation Mills to the top of the circus, the height of the rope from the ground being about 40 feet, and the distance be gone over some 80 feet. About half-past seven the lady set out from the window. She tripped along the rope for a few feet with light and easy step. About 15 feet from the starting point, however, she came to a thick knot, several inches long. She tried to cross it but failed, and then turned back. A moment afterwards she resumed her journey. She approached the knot cautiously, and partially crossed it; but just as her hindmost foot was leaving it she stumbled. At once she threw aside her pole, and in a desperate effort she grasped the rope. She is a strong muscular woman, and exerted herself greatly to regain her position on the rope; but despite her endeavours she remained suspended by the hands. The greatest excitement prevailed amongst the hundreds of spectators. There were loud cries of "Lower the rope," and the rope was lowered, a number of feet. A number of men then massed themselves together directly below the woman, and begged her to fall She did as advised and was caught by the men, and although the distance she fell was 20 feet (and not 50 feet stated in the Manchester papers), she sustained no injury beyond the fright and a shake. She appeared, afterwards, in the circus on the tight-rope, and, much to the delight of the audience, went through a series of extraordinary feats. The performances last evening were for the benefit of Mr. Clifford Wallett, the tight rope dancer and bare-back equestrian. The attendance was very good. The tightrope contest was highly appreciated. To-morrow night Mr. Harry Montague, the energetic manager, takes his farewell benefit, when trust that, as on former occasion, the circus will be crowded. For the nature of the programme, we refer our readers to the advertisement in another column.
Bolton Evening News - 5 May 1869 p.2.

The accident which occurred to the FEMALE BLONDIN the other day has been made the most of; it has not only been served up, with strong seasoning, as a sensational paragraph, by a considerable number of journals, but has been dragged into service by a Manchester contemporary, and made to do duty a peg whereon to hang a leader — a kind of homily to the Mayor and Corporation of Bolton, for permitting such hazardous and horrible feats to be performed in this town, by people whose strength of nerve seems to have absorbed all considerations of personal safety, but more especially those of the tender sex. The editor is highly indignant at our local authorities for their apparent indifference to the lives of Her Majesty's dare-devil lieges, and to the sensibilities of the rest of the community. The article itself is a perfect sample of sensational writing as it has been our good fortune ever to read. Some sentences positively thrill the very heart into almost actual stillness, and make the blood curdle in the veins—doing, indeed, as much damage to the nerves of the reader as the actual sight of the Female BLONDIN's stumble and fall must have done those of the spectators who witnessed it; and, after describing in heroics the gallantry of the "brave men" who "massed themselves together as the old Romans locked their shields in battle," to catch the venturesome amazon as she fell, giving "no heed to possible broken skulls, if not to their own inevitable death," the writer exclaims:- " But what have we to say to the Mayor and Aldermen, the Common Council, and the police of Bolton, that they could allow possible suicide to occur in open day, in a public place, where thousands could witness the shameful spectacle? We are sorry there exist no pillory stocks in Bolton, or we might see something more agreeable than 'four and twenty blackbirds baked in a pie.' Bolton has just closed a beautiful exhibition of art and manufactures in her new Mechanics' Institution. The 'gentlemen' of Bolton have subscribed their gold and the men toiled their shillings and pence, for the erection of this grand new building; and here, a month after its dedication, find Mr. PABLO FANQUE and somebody of the Old Coronation Mills helping create a spectacle that would be horrible even in bull-fighting Spain. For all that the Corporation and magistrates of Bolton cared, this poor female BLONDIN might have been broken up into a thousand quivering morsels. The manly 'ruffyeads' saved her, and they did honour to the town." All this will, no doubt, sound might fine to the "ruffyeads" of this borough. One of their number resident in Manchester has taken up cudgels in defence of the Mayor and Corporation, and, most effectually, we think, disposes of the Editor's bunkum. He says— "Why the Bolton Corporation should be singled out for censure, I cannot understand. That there is blame attached to some one I admit; but can scarcely see why the saddle should be put on the back the Bolton Corporation. Does a ropewalker violate the law? If so, why not stop all "Blondins?" Are the Bolton Corporation to be judges who are competent to perform this dangerous feat? Decidedly not. Then why say that "for all that the Corporation and Magistrates of Bolton cared, this poor female Blondin might have been broken up into thousand quivering morsels." The lady herself is to blame for engaging in so dangerous an undertaking; the manager for making no provision for her safety and the party having charge of the rope for seeing that it was in no better condition. In Manchester, only last summer, at the Pomona Gardens there was a male "Blondin" giving exhibitions, and the corporation of 'Cottonopolis' did not interfere. At the present time, at one of the music halls, as may be seen from the numerous woodcuts placarded on the walls, there is a female globe performer, who, standing on the ball, ascends a plank to as great an altitude the place will permit; and still it is tolerated. Numerous other gymnastic artistes have also appeared, both male and female, and many serious accidents have occurred, yet still no magisterial interference. If, Mr. Editor, your corporation can see ho harm in allowing it, surely you cannot blame the Bolton Corporation for following the example of so wise a body. The superlative character of the indignity of the Editor of the paper in question at our civic authorities is fully exemplified in the following concluding sentence: "We should like to compel the whole Corporation and Magistrates of Bolton to walk on that abominable knotted rope, only six feet, not sixty, from the ground, followed by the amiable proprietor of the Old Coronation Mills."
Bolton Evening News - 8 May 1869 p.2.

Madame Caroline was to have the last word, turning her fall into an opportunity to elicit the sympathy of the populace for her benefit night. In the end the show went on, including an invitation for the audience to participate:

TO THE MEN AND WOMEN BOLTON.

Allow respectfully and sincerely to return my most warm and hearty thanks to those manly hearts who caught in their arms whilst imperilled in life and limb, in my endeavours to assist my brother artiste.
At the same time may I claim your sympathy and support WEDNESDAY EVENING, May 12, which night Mr Pablo kindly given me as a BENEFIT. On that occasion will give a New Hat and Bonnet to the best male and female walkers on the low rope (being amateurs); and in a Foot Race of 200 yards, a new Dress Piece for the first woman, and a New Bonnet for the second woman. Prizes for the Best Male Walker, 300 yards, and the Best Male Runner 150 yards. First and only night of "HIGHLAND JESSIE; or, the Dog of Loch Lomond" On that evening I will endeavour to eclipse prior efforts, and can assure my friends that all who come will see feats achieved never before attempted by any artiste in my line of business. Mr. Pablo will also kindly introduce Two Newly-broke Horses. Again, allow me to thank those who sympathised with my late accident, And remain, Your obedient servant. CAROLINE PAULO, The Female Blondin, Pablo's Circus, Ashburner-street, Bolton.