William Batty was one of the most influential circus proprietors of his time. Pablo Fanque started as his apprentice and he went on to not only provide financial backing for Fanque when he started his own circus, but also to withdraw it, causing bankruptcy. All successful circus proprietors were businessmen who knew what would bring in the crowds. This included well known celebrities of the moment. In most cases, these were performers, or sometimes sportsmen, for example, Pablo presented Robert Chambers, the champion professional sculler, with a silver cup in 1863. They also courted respectability in a number of ways, including providing the proceeds from benefit nights to local good causes. 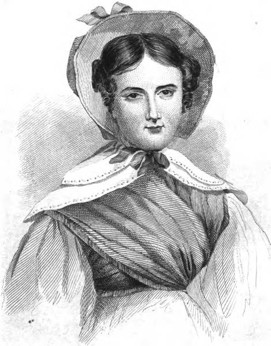 In September 1838 the story of the rescue of passengers of the Forfarshire paddle-steamer by Grace Darling and her father gripped the Victorian public's imagination. Here was a heroine that summed up the values of the age. William Batty was quick to seize on the story and the admiration it had engendered, by proceeding to give a benefit night in her honour at his Circus Royal on 8 November 1838 in Edinburgh. The proceeds amounted to £20, and Batty dispatched his acting manager, Mr. Silvester to deliver the money.

Even before the benefit night, The Scotsman voiced disquiet about what it later described as 'Grace Darling Mania' and, by implication, the proposal that her deed might be exploited by connection with the circus:

"Mr Batty, also, we observe, promises to devote an early evening to the benefit of Grace Darling. We are not disposed to underrate the heroic conduct of this young lady; but really we begin to fear lest she should be overwhelmed by the tide of public favour which has risen so rapidly around her, and would fain come to her rescue. The public having amply expressed their sense of her noble achievement, should now allow her to enjoy in quietness the applauses of her own approving conscience."
The Scotsman - 27 October 1838 p.3.

Grace wrote a letter of thanks to William Batty, which was promptly published in the Caledonian Mercury on 15 November, no doubt to provide publicity of his generosity. The Edinburgh Courant reprinted it, but added their own comments concerning her naivety, which tells us a great deal about underlying moral attitudes towards the circus:

MISS GRACE DARLING. – The following letter from this lady to Mr. Batty, of the Circus Royal, appears in one of our contemporaries:

'Longstone Lighthouse, Nov. 11, 1838.
William Batty, Esq.
SIR. – I beg to acknowledge the receipt of L.20, which has been handed over to me by your acting manager, (Mr Silvester), as the proceeds of an evening's entertainment (after deducting expenses) at your arena in Edinburgh. Allow me, Sir, to return you my sincere acknowledgement for the kindness which you have exhibited towards one personally unknown. I am likewise sensible of the great kindness that has been so liberally bestowed on one so humble as myself by the people of Edinburgh; and it having been intimated to me that my presence in Edinburgh would greatly oblige those who have manifested so much anxiety for my welfare, I will take an opportunity shortly of visiting your arena in person.
I am, &c.
GRACE HORSLEY DARLING
To W. Batty, Esq', proprietor of the
Circus Royal, Edinburgh.' 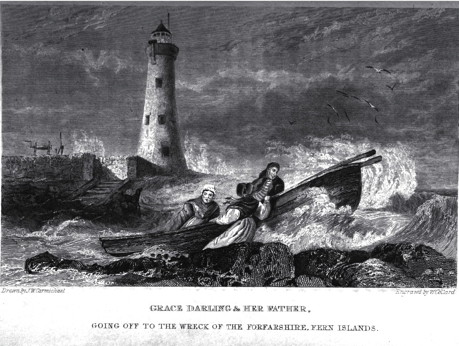 We believe all parties are agreed that the conduct of Miss Darling, in saving the lives of the crew of the Forfarshire, was the brightest example of heroism devoted to the cause of humanity that has been exhibited in modern times. Those who admire the most, will be the first to deprecate the conduct which has since been pursued towards her, of dragging her before the public on all occasions, and for the most trifling causes. That Miss Darling should submit to this, can excite no surprise. Born, we believe, and certainly brought up on a rock, in the middle of the ocean, and from that cause as ignorant of the world as childhood itself, it is not to be wondered at that she should submit, without contempt, and indignation, to the medalling interferences of those who, under pretence of gratifying her, are only intent on ministering to their own vanity. The letter we have quoted confirms us in this opinion. It is clear she has no conception of the nature of what she proposes to do. Fortunately, however, she has fallen into trust-worthy hands; and we have too much confidence in the good sense and the good feeling of Mr. Batty to imagining for a moment that he would encourage a woman who had deserved so well of her country, to place herself in a position which can be regarded in no other light than as a show, competing for the applause of the vulgar with his well trained quadrupeds. – Edinburgh Courant.
Perthshire Courier - 22 November 1838 p.1.

It was not long before the press were to suggest that Batty had gone much further by offering her a contract with his circus. A notion he was forced to deny. The denial was to no avail as the story was repeated in newspapers throughout the country.

It appears that when Mr. Batty, the equestrian, sent the £20, the proceeds of a night's entertainment, to Grace Darling, his messenger proposed to engage her to join his Circus, and visit the principal cities and towns, for which she was to receive £10 a week, besides travelling expenses. Acting upon the advice of a kind and judicious friend at Bamburgh, the proposal was properly declined. – Newcastle Paper. [We are requested by Mr Batty's acting manager to state, that no such offer was made to Miss Darling.]
The Scotsman - 12 December 1838 p.4.

Indeed many newspapers juxtaposed the story with that of a gift of £50 by Queen Victoria to Grace. It was clear whose heroine she was, and that she should not be appropriated.

The publication of Grace Darling, The Maid of the Isles, the following February, turned Batty's generosity into a cynical attempt to corrupt the morals of an innocent and naive family and as such aimed to teach a moral lesson to all its readers: 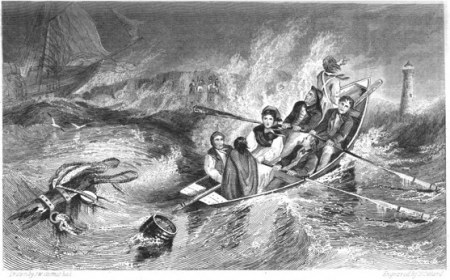 a stranger arrived at the island, who announced himself as the bearer of a communication from Mr. Batty, proprietor of an equestrian circus then in Edinburgh. An evening's entertainment had been given for the benefit of Miss Darling, and a house crowded to overflowing sufficiently bespoke that the enthusiasm created by the heroine of Fern Islands was as general in that city as elsewhere. The bearer of this intelligence was entertained by the inhabitants of the light-house with their wonted hospitality; and this individual strove, by the most courteous demeanour, to ingratiate himself with his good-humoured entertainers. He dwelt upon the pleasure which the appearance of Grace Darling would afford in Edinburgh to her numerous admirers, and at last hinted how desirous Mr. Batty was that she should make a visit there whilst his party remained. Yet still the real object of his mission, which, it seemed, was to obtain the concurrence of Grace Darling to appear within the arena of the circus, was never once explained; and when a request was urged that she would place her name to a paper which he tendered for the purpose, talking at the same time about his desire that Mr. Batty should have a satisfactory assurance that he had fulfilled his mission at the island, Grace frankly complied, naturally imagining an acknowledgment of the sum sent by Mr. Batty was what their guest required.
...
Amazement for some time paralysed the faculties of Mr. Darling, when their friend commenced an animated remonstrance with him upon the degradation to which he had agreed to subject his daughter; conjuring the start led father to reclaim, without delay, his promise; and by doing so, guard the respectability of his child from the blow it would receive by her appearing within the arena of a public circus. ... The displeasure experienced by Mr. Darling at this occurrence, was tinctured by no slight degree of pious horror; and the idea that a child of his should even enter within the walls of a profane play-house, was tantamount to falling away from all that is virtuous and good.
...
It was long ere this circumstance was forgotten by Grace, and the remembrance of Mr. Batty’s proposal was always associated, in her mind with feelings of the keenest mortification. The striking marks of regard previously received from her friends in Newcastle, could scarcely teach her to forget the humiliating lesson she had received.
Grace Darling, The Maid of the Isles (1839) p.346-349.