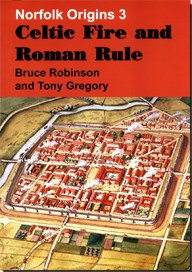 The second edition of Celtic Fire and Roman Rule is now available. Brought up to date by Chief Curator of the Norfolk Museums and Archaeological Service John Davies, it carries the story of Norfolk forward from about 500BC to the breakdown of Roman Rule circa 410AD. And what years those 1000 years were! There was great technical advancement and some of the most complex and eventful moments in Norfolk's long history. This is regarded as the standard introduction to Celtic and Roman times in Norfolk.