east anglian history books
Poppyland
Publishing
authors
back
<
Women in the Archaeology & History of West Norfolk
Scholars, Saints and Sinners: the stories of some of Norfolk’s more idiosyncratic clergy of the 19th and early 20th centuries
Storm Warriors of the Suffolk Coast
Dorothy Jewson - Suffragette and Socialist
Pablo Fanque and the Victorian Circus
>
also recommended

The Diary of a poor Suffolk woodman 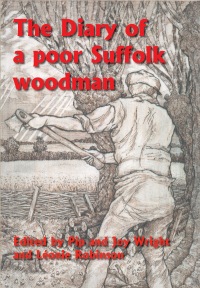 The Diary of a poor Suffolk woodman is a special publication - because it features a poor man's diary. Few of William Scarfe's class in the early 1800s could write well enough to produce more than fifteen years of a journal of his life and village. Now, over 150 years later, we are able to share his world and enjoy the social history of the 1830s through his words.

Pip and Joy Wright and Leonie Robinson have transcribed the words that William Scarfe wrote in the margins of a prayer book he had been given by the local rector. To his words they have added pictures, contemporary accounts and careful explanations to provide a context. The book is a model for any local historian, and whether or not you ever visit the village of Thorpe Morieux in Suffolk, you will find in the pages the life of an East Anglian countryman of the early 19th century.