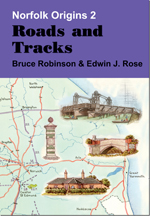 Roads and Tracks is a greatly expanded edition of a title first published in the Norfolk Origins series in 1983. Much has moved on since then - not least the amount of dual carriageway the county now has. But research and archaeology have moved on as well, with new finds and reinterpretations of what has already been discovered. Bruce Robinson introduces the book:

The book looks at the development of transport by foot, horse, carriage and car across the centuries, investigates the origins of ancient highways and by-ways from Iron Age and Roman times and concludes with the arrival of the car and developments into the 21st century.