east anglian history books
Poppyland
Publishing
authors
back
<
The Golden Age - The rural crafts of John Golden and the Golden family of Northrepps
Beneath the Clouds - A Social History of the US Army Air Forces in the UK 1942-1945
Thomas Bilney, the Norwich Martyr: "The Father of the English Reformation"
The Baker Brothers: Diaries from the Eastern Front 1914-1919 - Oliver Locker-Lampson and the Cromer Men of the Russian Armoured Car Division
Ordinary Women, Extraordinary Lives
>
also recommended 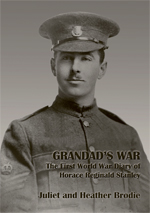 Grandad's War - The First World War Diary of Horace Reginald Stanley. The young Horace Stanley had joined the Cambridgeshire Regiment before the First World War. By the time this territorial unit arrived on the battlefield, he was a sergeant in B company, 6 platoon.

He went to war with his military equipment but also with a sharp mind, a notebook and most remarkable of all, a camera amongst his kit. He fought with distinction at the second battle of Ypres and when invalided out, managed to find a way to re-enlist with the Army Ordnance Corps. This illustrated diary, with its introduction and background information, is another important contribution to the understanding of that extraordinary and deeply moving time. Support material for the book can be found on the 'Support and Resources' section of this web site.