east anglian history books
Poppyland
Publishing
authors
back
<
Thomas Bilney, the Norwich Martyr: "The Father of the English Reformation"
A School Through Time: 200 Years in the life of Antingham and Southrepps School and its people
The Baker Brothers: Diaries from the Eastern Front 1914-1919 - Oliver Locker-Lampson and the Cromer Men of the Russian Armoured Car Division
Storm Warriors of the Suffolk Coast
Nine Norfolk Women - Succeeding in a 19th century man's world
>
also recommended 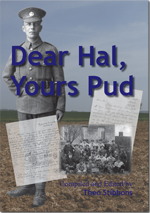 When Lord Kitchener famously said, at the beginning of the First World War, "Yours Country Needs You", the young people of Britain responded with alacrity, little knowing what lay before them. Most were straightforward, determined, adventurous, dutiful, with worried and caring friends, brothers, sisters, mothers and fathers.

The young Norfolk soldier, nicknamed Pudlo, featured in this book joined up with his comrades. Throughout his training, his journey to the Front and his time in the line and a long stay in hospital after being injured in the Battle of the Somme he maintains correspondence with home. He deals with the mundane and maintains a humanity not all could cope with. And after the conflict he said nothing to the next generation until his letters were found in a family suitcase.