Storm Warriors of the Suffolk Coast 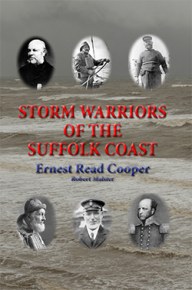 Storm Warriors of the Suffolk Coast is a tale of lifeboat service on the Suffolk coast and is one of those occasions when words and pictures come together in a magical way to recall times gone by. The text was first written by Ernest Read Cooper and published in 1937; this new edition is revised and updated by maritime historian Robert Malster.

When originally published, no illustrations were included - though Cooper, as station Honorary Secretary at Southwold, had often gone to sea with the lifeboat - and he'd often taken his Kodak box camera with him. Today's lifeboats all carry cameras to help with publicity for the RNLI; then is was a rarity. To have a picture from 1905 of the crew of the Joseph and Yvonne clinging to the mast of their sunken vessel as the lifeboat moved in to save them, is unique. Hear from the editor calling in at Southwold Lifeboat Museum: