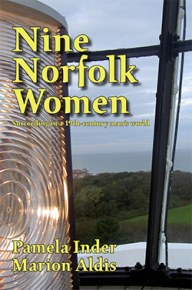 Before reading Nine Norfolk Women - Succeeding in a 19th century man's world you'll probably ever have heard of most of the women featured in it - and that's quite intentional. The common perception of the woman's role in the 19th century may have been slaving away below stairs or genteely sipping tea above stairs. But through diligent research in a wide range of archives, authors Pamela Inder and Marion Aldis have continued their research into the lives of women in a time gone by - when women were not expected to be successful in the world of enterprise. A family of money-lending ladies, female lighthouse keepers, enterprising business women, artists and dressmakers, writer and farmers - and two Norfolk women whose lives took them far from their home county.

This book is for all those with an interest in social and local history, and is also an excellent example of how research that starts from census records and local directories can expand to give a fuller picture of our ancestor's lives.