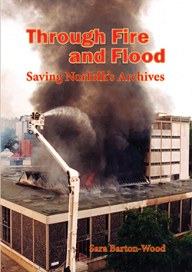 On August 1st 1994, a column of smoke rose over the city of Norwich. The Central Library was on fire and thousands of books and documents - modern and historical - were lost. In the basement of the building was the Norfolk Record Office, the home of a thousand years of priceless documents. As the fire raged and water poured from hoses onto the building, there was great fear that even the fireproof doors of the Record Office could not hold out.

But the documents did survive, though a percentage were considerably affected by water damage. What to do next? In Through Fire and Flood - The Saving of Norfolk's Archives the fire and the events that followed, right through to the building of the splendid Archive Centre that Norfolk boasts today, are chronicled by journalist Sara Barton-Wood, latterly on the staff of the Norfolk Record Office. Available from 1st August.