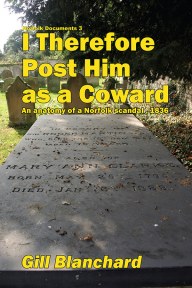 I Therefore Post Him as a Coward recounts how a show-down between a knight and a clergyman and a challenge to a duel engulfed the Norfolk town of Burnham Westgate (now Burnham Market) in July 1836. The demand by the curate, Henry Blyth, that Lord of the Manor, Sir Roger Martin, should refrain from appearing in the parish church with his housekeeper Mary Anne Clarke was played out in a series of public handbills. Rector Bernard Gilpin sought to pour oil on the troubled waters, but to no avail. Genealogist and house historian Gill Blanchard uncovers the background to the story.