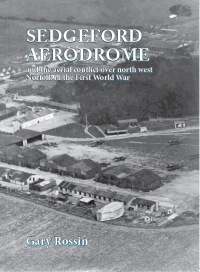 A detailed account of this west Norfolk aerodrome, both through archive research and archaeological excavation carried out by the SHARP team.

The word Zeppelin struck terror into the heart of much of the population of Britain as they realised that, unlike in years past, warfare might arrive in their city or town rather than be confined to some distant battlefield. The story of the Zeppelin raids on Britain has often been told elsewhere but in this publication the author takes the account further by putting the raids into the context of the subsequent development of air power in the east of England, with a particular focus on Sedgeford.

The accounts of the young men who flocked to try their hand at aerial adventure, their training at Sedgeford and the frequent loss of life before reaching a battlefield, are poignant. The skill and daring of Cadbury and Leckie - and their gratitude to have a Night Landing Ground - are the stuff of inter­war story telling. The perceptive accounts of death by fire written by Cadbury - a man from a Quaker family - sit alongside the responses of the populations of King's Lynn and Great Yarmouth as they reacted to injury and death delivered from the skies. The almost hysterical reactions of those who saw spies everywhere are also part of the story.

A particularly valuable aspect of the book is the part of the wireless scientists in the conflict, bringing their knowledge and perception to the efforts to defeat menace at sea and in the air. In a hut perched on the cliff-top at Hunstanton, the technicians scanned the wave bands to alert the fleet or the aircraft to give them the opportunity to gain an advantage of position and time. And in Room 40 at Whitehall, the birth of G.C.H.Q was under way ...