George Roberts: A Life that 'Did Different' 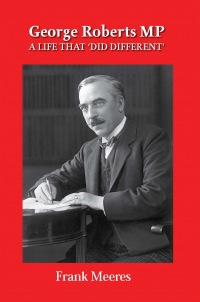 On the 125th anniversary of the formation of the Norwich branch of Independent Labour Party, it's fitting that Frank Meeres' latest book examines the life of one of Norwich and East Anglia's early socialist pioneers. Born in Chedgrave in 1868, the son of a shoemaker, George Roberts became the first Labour party Member of Parliament in East Anglia. He rose to become the party’s Chief Whip and was one of the very small number of Labour MPs to serve in wartime Governments under David Lloyd George. He become a cabinet minister and a privy councillor, serving in vital roles as Minister of Labour and then as Minister of Food. After the war, disillusioned with the Labour Party, he stood for Norwich as an Independent candidate – and won. He then finished his journey to the right, becoming a Conservative MP.

George Roberts was always fiercely independent, making his own mind up on the great issues of the day and speaking out: he was never afraid of offending anyone. A little man, he was a big figure in local and national life in the first quarter of the twentieth century. He deserves to be far better known. This book brings to life the dramatic story of 'Georgie' Roberts.

A sample is available below.