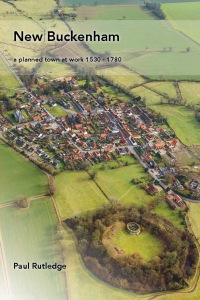 We consider new towns a phenomenon of the 20th century but they have been part of the social and commercial structure of British society since Roman times. New Buckenham was a latecomer to the Norfolk scene having been established by the 1st Earl William d'Albini as an adjunct to his new castle of Buckenham at some time between 1146 and his death in 1176. William planned his new town in a simple grid pattern on a spur of land rising a few metres above a western-flowing beck that eventually forms one of the head-waters of the River Thet. New Buckenham is well-known to historians as a planned town whose layout and scale is largely unaltered since medieval times, but few records exist before 1530. This study therefore draws on the period post 1530 concentrating on the town's heyday in the 16th and 17th centuries. Its decline after 1780 means that much of the housing stock has been retained to the present day and the ownership of many of these homes have been reconstructed from the evidence available.