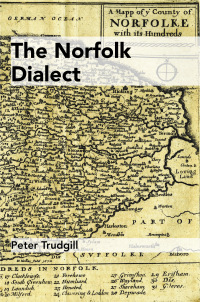 The Norfolk Dialect looks first at the linguistic history of the county, and at the many different languages which have been spoken there, to see what influences may have contributed to the distinctive nature of the dialect.

It then examines the dialect of Norfolk in the context of the English dialects of Great Britain, illustrates the links with Suffolk and demonstrates the division at the Fens. One of author Peter Trudgill's key points is to show that the Norfolk dialect is a form of the English language with a fascinating history and a unique structure that is worthy of respect and maintenance, not of ridicule and discrimination. Peter Trudgill recently retired as Professor of English Linguistics at Fribourg University, and is President of FOND (Friends of the Norfolk Dialect).