The Zeppelin Raid on Yarmouth 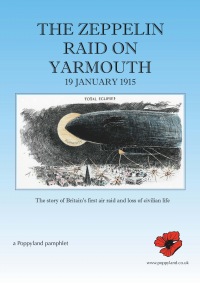 On 19th January 1915 the first air raid over Britain took place when three Zeppelin airships made their way towards the east coast. One turned back due to engine trouble, the other two, bound for Humberside, changed their plans due to bad weather. Instead they set their sights on the small ports of Great Yarmouth and King's Lynn. It was L-3 that struck first dropping bombs and incendiaries on Yarmouth. The result was the first civilian casualties from an air raid in history.

Originally published as the first chapter in his book, Sedgeford Aerodrome and the aerial conflict over North West Norfolk during the First World War, this pamphlet tells the story of that fateful night in world history.