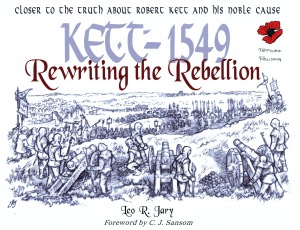 Much has been written and imagined about Kett’s Rebellion in 1549 including the just released historical novel Tombland by C. J. Sansom, who has also written the foreword to this, Leo R. Jary’s, latest exploration of Norwich’s past. The author attempts to counter the bias of the establishment figures who wrote accounts at the time and, using his military knowledge, establishes a new theory concerning the question that has vexed historians since; the exact location of ‘Dussindale’, the place where Kett was finally defeated. Jary’s own illustrations and maps bring his persuasive research and arguments together in a book that will be of interest to anyone fascinated by Norfolk history, Kett’s Rebellion or Tudor military technology.