Saving Einstein: When Norfolk Hid a Genius The Double Life of Oliver Locker-Lampson 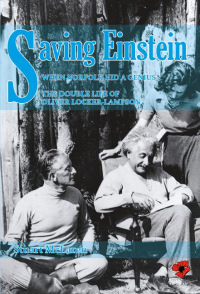 In September 1933, Albert Einstein, threatened by Nazi assassins, suddenly turned up in Cromer in north Norfolk, the guest of Commander Oliver Stillingfleet Locker-Lampson MP, a larger-than-life character straight out of a Boy’s Own adventure yarn. Saving Einstein tells the story of the events, politics and personalities behind the month he spent living in a hut at a secret camp on Roughton Heath. It was here where Jacob Epstein sculpted his bust and the Commander plotted to use Einstein’s rescue to awaken the nation to the dangers posed by Hitler and the rise of fascism. The irony is that he had himself only recently led his own fascist movement, the Blue Shirts, and being seen as a possible British Führer by the Nazis.

This bizarre interlude in Einstein’s life, chronicled in full for the first time, would prove to be the last he would ever spend in Europe. For Commander Locker-Lampson, the encounter would turn him away from the dark allure of totalitarianism. He would join the fight against home-grown fascists like Oswald Mosley and support his friend, Winston Churchill, in opposing the appeasement of Europe’s dictators. He would help many ordinary Jews escape the Holocaust, which led him to being described by the son of one man he rescued as ‘Truly a Righteous Gentile’.