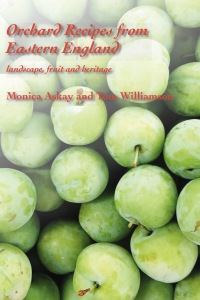 The East of England is one of the most prolific fruit growing areas of the United Kingdom. Often overlooked in favour of the South East, West Midlands or the West Country, the region has a rich history of fruit growing with orchards being a familiar part of the landscape.

This short book not only looks at the history of orchards in eastern England, and of the fruit grown within them, but is also a recipe book, providing examples of how different kinds of fruit typical of the eastern counties, varieties of apple, pear, plum and cherry, can be used and eaten. The authors present a mixture of historic recipes, long-established ‘traditional’ recipes, and also new ones specially devised to make the best use of the fruit most closely associated with the old counties of Hertfordshire, Bedfordshire, Essex, Norfolk, Suffolk and Cambridgeshire.

The book is one of the outcomes of ‘Orchards East’, a project supported by the Heritage Fund.