east anglian history books
Poppyland
Publishing
authors
back
<
Medieval Flushwork of East Anglia and its Symbolism
Norfolk and Suffolk Churches: The Domesday Record – A Handbook for Reference and Use
The Last Haul: Recollections of the Days before English Fishing Died
The Book of Margery Kempe of Lynn
Doin Different: New Ballads from the East of England
>
also recommended

Right Away: The Railways of East Anglia 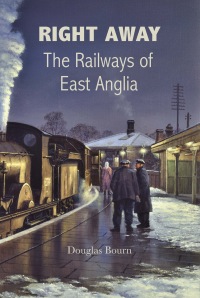 Railway histories are always popular and the continued regard for heritage railways around the UK highlights the nostalgia the industry evokes. Inevitably many concentrate on the locomotives, lost stations and lines that crisscrossed the region. What has often been missing have been the stories of the individual railway workers and the conditions under which they worked, despite some valuable autobiographies and memoirs of railwaymen who worked in the area. This volume aims to address this gap, bringing to life stories of railway workers within a context of the changing nature of the industry from the mid-nineteenth century to the present day.

Heavily influenced by his personal and family memories, Douglas Bourn draws on available memoirs, alongside other evidence from railway magazines and local and regional newspapers, to provide the reader with an introduction to the fascinating story of railways in the region. The book takes readers on a historical journey starting with the creation of the first railways in East Anglia, via the growth of a network that promoted and served the agricultural, industrial and tourist development of the towns throughout the three eastern counties, and ending with their almost inevitable decline, as transport needs changed in the post Second World War period.