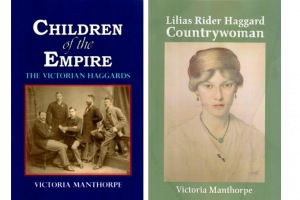 Rider Haggard remains the best known of ten Norfolk siblings who came to maturity as the British Empire was reaching its zenith at the conclusion of the 19th century. Because Rider's novels were so successful, the others have often been overlooked—yet his brothers were as much involved with the Empire as was he. Their opportunities and careers were dependent on the expansion and maintenance of the colonial world. Theirs is a good story, worth the telling and one which reflects both the vitality and confidence of the British Empire and its intrinsic weakness. There stories are told in Children of the Empire - The Victorian Haggards

Lilias Rider Haggard was the daughter of the famous author and an accomplished authoress in her own right, a columnist for the Eastern Daily Press and a range of national publications. Hers is a very different story. As a VAD nurse she watched as the harrowing conflict changed their world. When she returned to her Norfolk home she came back not only with a new depth and compassion but also with a determined affirmation of rural life that soon found its expression in her on countryside matters in many articles and books.