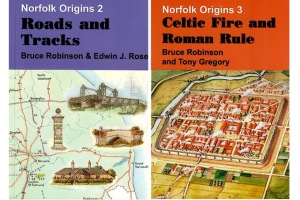 Roads and Tracks looks at the development of transport by foot, horse, carriage and car across the centuries, investigates the origins of ancient highways and by-ways from Iron Age and Roman times and concludes with the arrival of the car and developments into the 21st century.

Celtic Fire and Roman Rule tells the story of Norfolk from about 500BC to the breakdown of Roman Rule circa 410AD. And what years those 1000 years were! There was great technical advancement and some of the most complex and eventful moments in Norfolk's long history. This is regarded as the standard introduction to Celtic and Roman times in Norfolk.