The Population of Victorian & Edwardian Norfolk 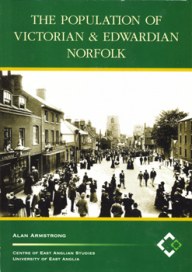 Initially Alan Armstrong was based in Norfolk in the late 1950s. Later in life he would become Professor of Economic and Social History at the University of Kent. He was among the first scholars to make systematic use of the nineteenth century enumerators' returns.

He has remained especially interested in demographic analysis as an approach to understanding economic and social change, and combines his academic skills and his long-standing interest in the county of Norfolk to provide this first population history of Norfolk in modern times.