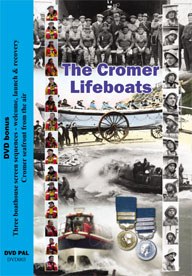 The Cromer Lifeboats tells the story of this famous lifeboat station, its crews and its supporters over the two centuries since it was founded in 1804. Henry' Shrimp' Davies recalls dramatic rescues in which he was involved. Still photographs from early years are complemented by footage of the 'Ruby and Arthur Reed II' lifeboat and the inshore lifeboat.

Recollections of Convoy 559 and the English Trader, including survivor Bill Redman, are part of the story from the war years. The three gold medals and the four silver medals won by lifeboat legend Henry Blogg in fifty years of service are recalled through animation and recollection.

As bonus tracks the DVD contains the video sequences made for the audio-visual presentation viewed by visitors to the Cromer lifeboat house and the current edition of the DVD includes a further video of the current Tamar class lifeboat Lester.