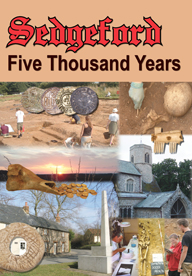 From 1996 a team of volunteer archaeologists has spent six weeks of the summer working in the parish of Sedgeford in west Norfolk. The DVD Sedgeford - Five Thousand Years tells the story of both the excavation of the sites in the village and of the history of the village that the archaeologists have uncovered.

The Sedgeford Historical and Archaeological Research Project, generally abbreviated to SHARP, has a national and international reputation. It is a first class opportunity for an introduction to archaeolgy for all ages and abilities, from sixth form students for those in later life who wish to undertake their first 'dig'.
For a preview of the one hour video see below.